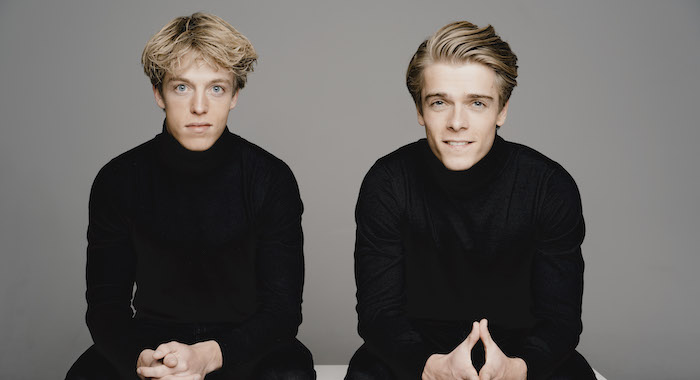 PLEASE NOTE: the 250 Free Student Tickets for this concert are now fully booked. To be advised of any returns, please join Camerata Musica's email list by registering at the link at the bottom of the home page.

The brothers Lucas and Arthur Jussen are the world’s foremost piano duo, recording exclusively for Deutsche Grammophon since 2010. They are currently Artists in Residence   at the Konzerthaus Berlin for the 2021-22 season. They have performed with orchestras such as the Boston Symphony Orchestra, the Philadelphia Orchestra, Concertgebouworkest (Amsterdam) and the Academy of St Martin in the Fields, as well as Montréal, Sydney, Singapore and Shanghai Symphony Orchestras. They have collaborated with conductors such as Christoph Eschenbach, Valery Gergiev, Manfred Honeck, Sir Neville Marriner, Andris Nelsons, Yannick Nézet-Séguin, Jukka-Pekka Saraste and Jaap van Zweden.

Their debut CD with works by Beethoven received platinum status and was awarded the Edison Klassiek audience award. A Schubert recording and Jeux, a CD dedicated to French piano music, were subsequently released. Their recording of Mozart’s Piano Concertos KV 365 and KV 242 together with the Academy of St Martin in the Fields and Sir Neville Marriner reached gold status. The Jussen brothers also recorded Poulenc’s Double Piano Concerto and Saint-Saëns’ The Carnival of the Animals with the Concertgebouworkest and Stéphane Denève, as well as concertos and chorales by Bach with the Amsterdam Sinfonietta. The latest addition to their discography is The Russian Album (released March 2021) which features works for two pianos by Rachmaninov, Stravinsky and Arensky. Please note that this concert is postponed. Camerata Musica Cambridge regrets that it has been necessary to postpone this concert because of Covid-related restrictions on audience numbers imposed by the managers of the concert venue. A revised date for the concert will be announced as soon as possible.

The versatility of Grammy-nominated baritone, Simon Barrad, has been heard in genre-bending concerts across the United States and Europe. His talent for unique and innovative programming and arranging – melding new and old, jazz and drama, classical technique and heartfelt folk idioms – has led to recent features in the United States at the Art of the Piano Festival, the Ravinia Festival, the Token Creek Festival, the Marlboro Music Festival, and Cincinnati Opera. His upcoming performance highlights include debuts at Wigmore Hall in London, the Philadelphia Chamber Music Society, and West Edge Opera.  However, the 2015/16 Fulbright scholar to Finland has also headlined concerts across the Atlantic at Helsinki’s Musiikkitalo, Finland’s National Opera House, and the Berlin Philharmonie. Through his performing and as a mentor for ArtSmart, which provides free music and singing lessons to teenagers in underserved communities, Simon Barrad strives to build a more equitable world of empathy and understanding through music.

Timothy Ridout is one of the most sought-after violists of his generation. With recent awards including the inaugural Sir Jeffrey Tate Prize in Hamburg and a Borletti-Buitoni Trust Fellowship, Timothy Ridout has confirmed his position at the forefront of young European soloists. He has been a BBC New Generation Artist since 2019 and joined the Bowers Program of the Chamber Music Society of the Lincoln Center in 2021.

Concerto engagements this season and last include Berlioz’ Harold en Italie with the Deutsches Sinfonie-Orchester Berlin, Orchestre National Bordeaux Aquitaine and Orchestre National de Lille; Mozart Sinfonia Concertante at the Sion Festival (alongside Janine Jansen) and with the Chamber Orchestra of Europe and Camerata Salzburg; Bartok with the BBC Symphony, Hamburger Symphoniker and Sinfonieorchester Aachen; Walton with the Philharmonia Orchestra and Luzerner Sinfonieorchester; and the Britten Double Concerto with the Tapiola Sinfonietta and Siberian State Symphony Orchestra. He has worked with conductors including Christoph Eschenbach, David Zinman, Gabor Takács-Nagy, Sylvain Cambreling and Sir Andras Schiff.

Equally in demand as a recitalist and chamber musician, his engagements include several appearances per season at the Wigmore Hall as well as throughout the UK, Europe and Japan. Festivals invitations encompass Lucerne, Lockenhaus, Heimbach, Bergen, Evian, Boswil Sommer, Heidelberger-Frühling, Montpellier, Aspen, the Enescu Festival and the Marlboro Academy; whilst his chamber music collaborators include Joshua Bell, Isabelle Faust, Janine Jansen, Christian Tetzlaff, Nicolas Altstaedt, Steven Isserlis, Kian Soltani, Benjamin Grosvenor, Lars Vogt and Christian Gerhaher, among many others. He also maintains a regular relationship with the Nash Ensemble.

Recognized as one of today’s most gifted artists, and enjoying an active career as both conductor and pianist, Ignat Solzhenitsyn’s lyrical and poignant interpretations have won him critical acclaim throughout the world. His extensive touring schedule in the United States and Europe has included concerto performances with numerous major orchestras, including those of Boston, Chicago, Philadelphia, Los Angeles, Montreal, London, Paris, Israel, and Sydney, and collaborations with such distinguished conductors as Herbert Blomstedt, Charles Dutoit, Valery Gergiev, Krzysztof Penderecki, André Previn and Mstislav Rostropovich. In addition to his recital appearances in the United States, Ignat Solzhenitsyn has also given numerous recitals in Europe and the Far East in such major musical centers as London, Milan, Zurich, Moscow, Tokyo, and Sydney. 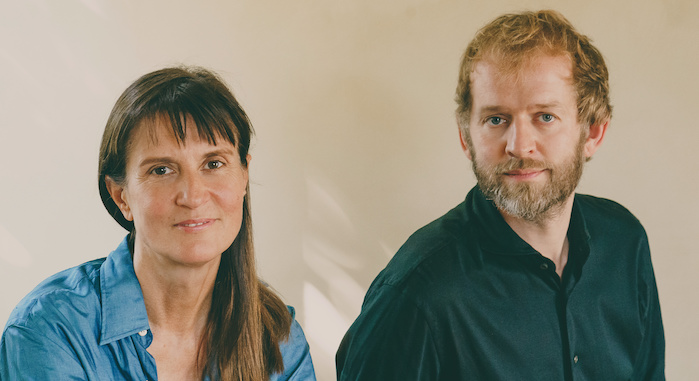 Long regarded as one of the world’s greatest violin virtuosos, Viktoria Mullova’s musical horizons continue to expand. Already a master of the classical repertory, she has jalso ourneyed into the world of jazz and world music, she works regularly with the period ensembles such as Orchestra of the Age of Enlightenment, Il Giardino Armonico, Accademia Bizantina and Venice Baroque, as well as appearing each season with top international orchestras and conductors.

This season, Viktoria Mullova performs Classical and Romantic repertoire with several major orchestras and conductors. Highlights include Copenhagen Philharmonic Orchestra, Orquesta Sinfónica de Galicia, Filarmonica Arturo Toscanini and Moscow Philharmonic Orchestra. With Alasdair Beatson she plays Beethoven recitals on gut strings and fortepiano, repertoire which also forms her most recent recording. As well as her own projects, she has also commissioned works from composers such as Pascal Dusapin, Fraser Trainer, Thomas Larcher and Dai Fujikura.

Viktoria Mullova plays either her ‘Jules Falk’ 1723 Stradivarius or a Guadagnini violin. 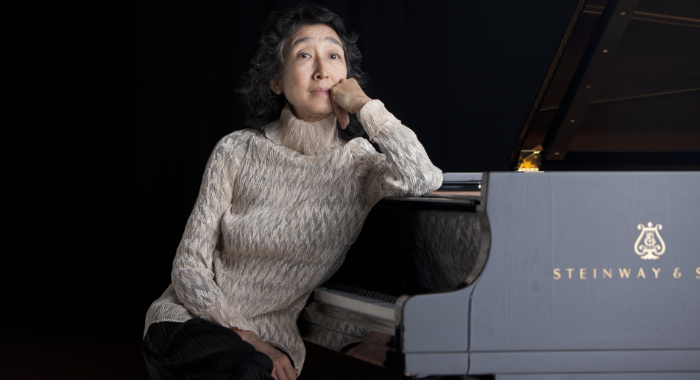 World-renowned tenor Mark Padmore has established an international career in opera, concert and recital. His appearances in Bach Passions have gained particular notice, especially his renowned performances as Evangelist in the St Matthew and St John Passions with the Berlin Philharmonic Orchestra and Simon Rattle, staged by Peter Sellars. He is currently an artist in residence at London’s Wigmore Hall where he celebrates his relationship with pianists Till Fellner, Imogen Cooper, Mitsuko Uchida and Paul Lewis. He has previously been artist in residence with the Berliner Philharmoniker and Bavarian Radio Symphony Orchestra, and recently appeared in a new Royal Opera House, Covent Garden production of Britten’s Death in Venice, where his performance was described as a “tour de force” and “exquisite of voice, [presenting] Aschenbach’s physical and spiritual breakdown with extraordinary detail and insight”.

Mark was voted 2016 Vocalist of the Year by Musical America and was awarded an Honorary Doctorate by Kent University in 2014. He was appointed CBE in the 2019 Queens’ Birthday Honours List.

Legendary pianist Dame Mitsuko Uchida brings a deep insight into the music she plays through her own quest for truth and beauty. Renowned for her interpretations of Mozart, Schubert, Schumann and Beethoven, she has also illuminated the music of Berg, Schoenberg, Webern and Boulez for a new generation of listeners. She is a former Visiting Fellow of Peterhouse, Cambridge, and her October recital is her fifth for Camerata Musica.

She has enjoyed close relationships over many years with the world’s most renowned orchestras, including the Berlin Philharmonic, Royal Concertgebouw Orchestra, Bavarian Radio Symphony, London Symphony Orchestra, London Philharmonic Orchestra, and – in the US – the Chicago Symphony and The Cleveland Orchestra, with whom she recently celebrated her 100th performance at Severance Hall.  Conductors with whom she has worked closely have included Bernard Haitink, Sir Simon Rattle, Riccardo Muti, Esa-Pekka Salonen, Vladimir Jurowski, Andris Nelsons, Gustavo Dudamel, and Mariss Jansons.

Since 2016, Mitsuko Uchida has been an Artistic Partner of the Mahler Chamber Orchestra, with whom she is currently engaged on a five-year touring project in Europe and North America.  She also appears regularly in recital in Vienna, Berlin, Paris, Amsterdam, London, New York and Tokyo, and is a frequent guest at the Salzburg Mozartwoche and Salzburg Festival.

Mitsuko Uchida records exclusively for Decca, and her multi-award-winning discography includes the complete Mozart and Schubert piano sonatas.  She is the recipient of two Grammy Awards – for Mozart Concertos with The Cleveland Orchestra, and for an album of lieder with Dorothea Röschmann – and her recording of the Schoenberg Piano Concerto with Pierre Boulez and the Cleveland Orchestra won the Gramophone Award for Best Concerto.